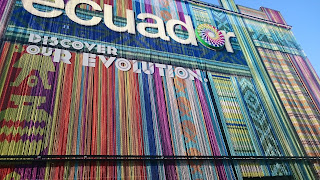 It's in Milan, and runs till October 31. The theme is "Feeding the Planet: Energy for Life". We spent a couple of days there in July, and here are some reflections on it.

I went to my first Expo in Vancouver in 1986, travelling on my own. Then I took my family to Hannover in 2000, and then went back there for another short day later on in the summer. I've been wanting to get back to an Expo ever since. Milan seemed like a good opportunity, and it was just a matter of finding a block of days when we could get there. 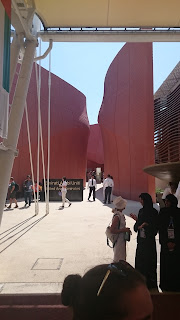 It's hard to describe what it actually is. I think it has its roots in such things as the Great Exhibition. It is dominated by international pavilions - we think around 120 countries were represented there. These vary from 5x5 metre rooms with posters and (usually) a few products to buy to sophisticated walk-through multimedia attractions, with restaurants and arts venues. There are also commercial pavilions, parades and entertainments both lowbrow and highbrow. I think the name of Epcot in Disneyworld is no coincidence; it is a kind of theme-park, "Disney" version of Expo.

It has grown! In 2000, we pretty much broke the back of Expo in one day - with two children who weren't fluent walkers. We spent two pretty long days there this time, and only got around it by skipping most commercial pavilions and ones with queues, so I think a fifth had gone unseen. I suppose, given that the theme was Feeding the Planet, it is not surprising that many of the pavilions should showcase food and drink. We ate in Azerbaijan, Brazil and Chile, and bought a drink in Laos. I was apprehensive about the heat of Milan in July, especially as Expo involves a lot of walking. As it turned out, it was me who came closest to succumbing to the heat, needing a fairly long mid-afternoon break on the second day, despite drinking plenty. The organisers have given consideration to the impact of heat. The heart of Expo is a covered boulevard around 1500 metres long. But you can't really avoid a lot of walking.

There are ethical issues raised by Expo. There were riots when it opened; it feels like an expression of globalisation. And it's very much the case that the countries and corporations present themselves as they wish to be seen. But on the other hand, there aren't many places in the world where you can get a glimpse of so many nations on their own terms at one go (North Korea, Sudan, Yemen, Laos, Ethiopia, Brunei...), and the subject matter does invite the countries to consider what they are doing about food security and sustainability, and the visitors to critically engage with these questions. I'd like to get back there and see more - failing that, the next Universal Expo is in Dubai in 2020 (though there's a smaller, specialised Expo in Astana in 2017 - just 100 countries represented ...)