Another couple of photos 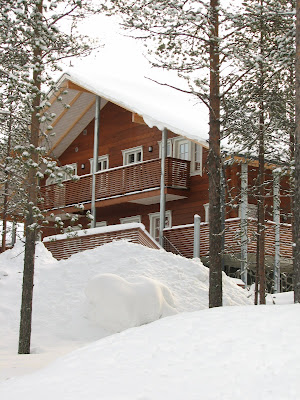 Here is a house in Levi. Notice balconies on different levels. Many houses also have ladders on the outside. I guess this is really to allow access if the doors on the ground floor are blocked. In addition, the "ground" floor of many houses is often several feet above the level of the ground around.

Timber was the dominant material used, although a new hotel being built in Levi was the usual concrete box structure. Rooves are often flattish, and the snow tends to sit on it - adding a layer of insulation in the winter. 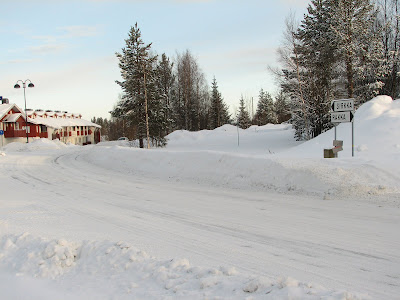 This is a through road in a town in Levi, Northern Finland - notice the signpost at the junction. Also notice that it is basically covered in compacted ice and snow. Even the main roads don't have ice and snow completely removed. And gritting/salting doesn't really clear snow if the temperature is too low, as it often will be here.

Snow is cleared after it falls - we heard snowploughs working through the night. It is often banked up between the road and the pavement - which has the effect of both providing a protective wall for pedestrians, and also providing a buffer for cars that lose traction (though I didn't notice that happening very often). In between significant snowfalls, the layers of snow get dirty - the places where dogs have weed marked until the next snow! (We didn't take a photo of this....). You can see layers in the snow by the road, like geological strata, marking the course of the season.

So the locals simply get used to driving on icy roads. I wonder if the fact that you psychologically get used to being slightly wary of your footing/roadholding is linked to the general cautiousness of the Scandinavian temperament.