We went to watch the film Ender's Game on Friday. I had been looking forward to the film for a long time.

in 1985. To get things in historical perspective, this was the year that Windows 1.0 was released. It looked, according to Wikipedia, like this. 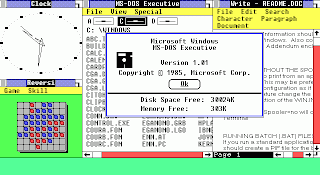 The internet was not commercialised until ten years later. In this context, Orson Scott Card was talking about something which behaved like the internet - not just from the point of view of technology, but as a medium of cultural exchange - and also virtual reality.

It would be easy to assume that large sections of the film were 2013 glosses of the 1985 book - but the fact is, Card's view of the future as portrayed in his books was close enough to where we are thirty years later that it is basically recognisable - if you read the book today, there's nothing terribly anachronistic about the world it portrays, and there's much SF that hasn't aged as well as that.

Other reasons that I was impressed by the book were:
Orson Scott Card is a controversial figure, due to his opinions on homosexuality. How should you deal with a writer who has opinions about issues which you strongly disagree with? Obviously when people are saying things in public, it's reasonable to disagree with them in public - and they need to be prepared to defend their beliefs. However, ought we to disregard someone's teaching on childhood and education because they persuaded the mother of multiple illegitimate children that he fathered to put them into a foundling hospital? And yet, look at the influence Rousseau continues to have on education. Many of Card's perspectives are hugely positive. Is it really not possible to take and affirm the good, whilst opposing the things you consider to be bad?

So, what of the film? Technically, very good. It was a real shame that the complex political and social aspects of the relationship between Valentine and Peter aren't developed - but you have to sacrifice lots when you go from your average book to your average film. And I'm sure the people who read the book as children or teens would love to have seen more games in the battle room. However, what was brought out much more strongly in the film was the climax - not the final battle, but what happens after. I'm trying to avoid spoilers here - but suffice it to say that Card's message about the need for tolerance and almost pacifism, is made clearer in the film than it was in the book.