Sentences function in different sorts of ways, and we can classify them accordingly. The most obvious type is declarative - this conveys information:

Word order and punctuation aren't sufficient to determine the type of sentence. For example, parents might say to their children:
in a way which acted as a command, rather than a question. Similarly, a declarative sentence can be used to ask a question through intonation. This might be represented in writing using a question mark, but the word order would be as for the first example above:
We can also distinguish major sentences from minor sentences. A minor sentence is an irregular sentence, in that it doesn't contain a finite verb (a process). These have various roles - here are some examples.
Wikipedia notes that sentences consisting of a single word are called word sentences, and the words in these sentences are called sentence words.
No comments:

There's an aeroplane in Russell Square ... 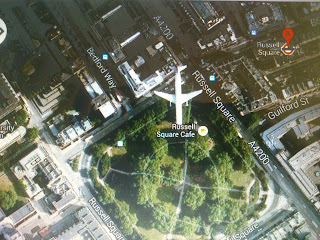 There's a pretty definite "north/south" divide apparent amongst some rock musicians. Following the research project I did for my OU module, I'm interested in seeing whether this is reflected linguistically in the lyrics. But I'd like some help ....

What I'm looking for are singers, and albums, that represent definitive "north" or "south" music. That is, music that self-consciously identifies itself as belonging to either "north" or "south". My plan would be then to create a language corpus from the lyrics of these songs, and carry out the sort of corpus analysis that is hinted about in my posts below about language stuff.

In a sense, I suspect that by "south" I may really mean London. The list I've been drawing up so far consists of:


Other ideas? And if you could pick one archetypal album from each band, which would it be? Your thoughts, please.
No comments:

Putting Adsense on here had resulted in the blog advertising Wonga. I think I've worked out how to stop this. Please don't use them - at least try looking at Peer-to-peer lending first. P2P lenders don't charge punitive interest rates. Have a look at Zopa, for example ...
No comments:

Songs about comings and goings.

A tour of York City Wall.
No comments:

... as expressed in TV and radio quizzes.

What used to happen was that you'd be invited to answer a pretty tricky question - perhaps on a postcard, or phoning in. The first answer drawn out of the hat would win. But the programme makers wouldn't want their job to be harder than necessary. They wanted people to "have a go" - but they didn't want to be completely flooded with right answers.

This even extended to children's programmes. I remember one mini-quiz - perhaps it was on Swap Shop or something like that - which showed a picture of penguins, and invited people to phone in and say what sort they were. There weren't three options to choose from - just a photo of a penguin. Like this ...

All that changed with the arrival of two things - premium rate phone lines, and call automation. Now, the winner of the prize draw could be determined entirely automatically, without tying up any staff in the company. And also, the more people who phoned in, the more money the company got. So the above photo would be accompanied by three options:

What type of penguin is this?
You'd actually have to be pretty determinedly stupid to get the wrong answer.

What's the effect? Well, all - or rather, anyone - could have a prize. But the prize is no longer worth having. It doesn't represent any achievement, and if you win it, it's just down to luck.
2 comments: