One of the reasons for the recent dearth of posts is that we've been away in Lapland for a week. Those people who are Facebook friends (and I suspect that is a substantially larger number than those people who read this blog!) have already had the opportunity to browse an album of 49 photos. But since they were well-received there, I thought I'd post some of them here as well.

We stayed in Levi, which is about 67.7 degrees North and 24.9 degrees East. Yes, that's inside the Arctic Circle. Yes, it is February. At this time of year, the length of day is not that different to here - and because the sun is so flat in the sky, twilight at dawn and sunset are both pretty long. The temperature varied, from just below freezing on one day - a really unpleasant day, with pretty continuous snow and wind, the snow sticking to everything - to -27C on the morning of the day we left. Below about -12C (-17F), you start to feel ice crystals forming in your nose and on your eyelashes - a clue early in the week that the temperature had dropped substantially from the previous day!

We managed both a ride in a husky-drawn sledge and in a snowmobile. We didn't manage to get close to reindeer (except to eat reindeer meat - very similar to beef) and we didn't see the Aurora Borealis. So I suppose we'll just have to go back sometime! 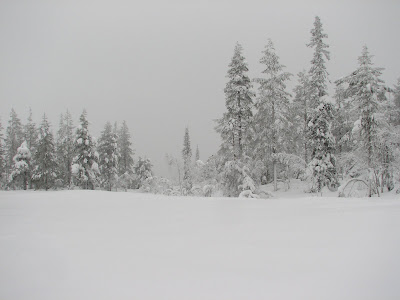 This photo was taken on that snowy, misty day on top of the fell. There was nothing to see except snow, mist and snow-covered trees. It felt completely arctic. 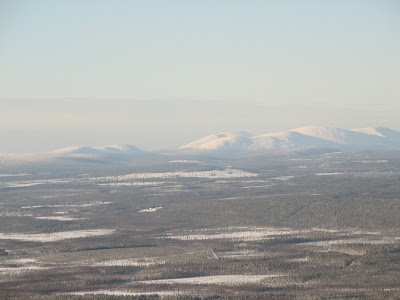 Most people assume that Lapland would be nothing but snow and ice - and that snow would be falling continually. We had no snowfall on about five of the seven days that we were there for, and steady snow only on one. On the days when the weather was clear, the visibility was amazing. The second photo was taken from the top of Levi Fell, looking (I think) to the southwest (towards Yllas). I think the visibility must have been several hundred miles ....