We went to see Swallows and Amazons, the stage version, at the Marlowe Theatre in Canterbury this week. The Marlowe has apparently been relatively recently refurbished, and is lovely, within easy walking distance of large numbers of car parks (though without its own dedicated parking, I believe), and Canterbury itself feels like a very safe place to be in the evening - a less busy version of York. 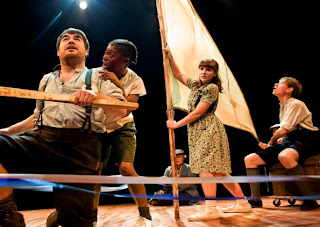 As a book, Swallows and Amazons presents itself as being quite "realist" - it's a story of children camping on an island in a lake in the Lake District, and not a lot happens. The people on the children's literature course that I was studying (EA300) who were reading the book for the first time often found it remarkably dull - which was quite shocking to me, to whom the whole series meant a huge amount when I was growing up. So it seems quite incongruous for the play to be presented as it was. For a start, it is a musical - a format which structurally cements a relationship with fantasy (how many people do you know that burst into a lyrically relevant new song to accompany significant events?). And then it has adults acting as the children. And then, rather than trying to use props and sets to realistically portray the events, it merely symbolises them. The picture above (from here) shows the Walker children sailing the boat Swallow. Roger (the ship's boy) is holding the front of the boat; Susan holds up the sail and John holds the back of it. The water is represented by other people in blue coats holding the blue and white ribbons.

This is all ingenious, and in fact demonstrates how powerful the imagination of the audience is. And this is significant because, as we discovered when studying the book, Swallows and Amazons is all about imagination. The children's imaginative play (the Amazons, Nancy and Peggy Blacketts' self-identity as pirates; the Swallows imagination of themselves as a naval commander, a homemaker or Robinson Crusoe) is the real heart of the story. In Peter Pan, James Barrie reluctantly accepts that children have to grow out of their imaginative world if they are to grow up. In Swallows and Amazons, the effect of the children's imaginative play is actually to transform the adult world - Uncle Jim/Captain Flint's book is saved from burglars, and he recovers his soul.

The play is thoroughly engaging. I got a little teary when I realised how it was evoking the story for me, early on. Towards the end, the cast venture more into the audience, and involves them directly with the battle on the houseboat and at the end, during the closing song, models of Swallow and Amazon are passed around the audience. I don't go to the theatre enough, and I love it when I do go, but I've not seen a play which is so capable of showing children the imaginative power of theatre, and indeed the power of imagination. This deserves great praise.