Trees in evening light at 10 am 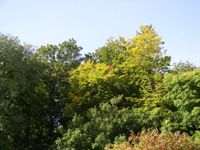 I had noted the fact that there was to be an eclipse on Monday, but put it to the back of my mind. Working on my computer, I noticed that the bright sunshine outside was not as bright as it ought to be - and then I remembered the eclipse. As with the total eclipse of 1999, the effect was a bit like "evening" arriving during the day - the intensity of the light dropped off a long way - I didn't notice a decrease in temperature, and some birds at least were still singing - but despite the blue sky and the sun being high, it just felt gloomy, or like sunset sort of time.

Other people I spoke to during the day had vaguely been aware of the eclipse, but had forgotten about it, and didn't notice anything at all.

In 1999, I was flying an aircraft back from Paris when the eclipse happened. We held mid-channel and gave the passengers a chance to have a look at it - it was about 98-99% total, but still definitely not dark. It was quite strange, however, for the sky to be so dim with the light source overhead (not on the horizon), but the horizon on either side East and West(hundreds of miles away) being brighter than where we were as the shadow was less deep there. I find the idea of the shadow of the moon racing across the earth at thousands of miles an hour fascinating.